People with an outer diameter between (89mm-1200mm) are used to calling them large-diameter seamless pipes because of their relatively large diameter.

The wall thickness (5mm-200mm) can actually be divided into: 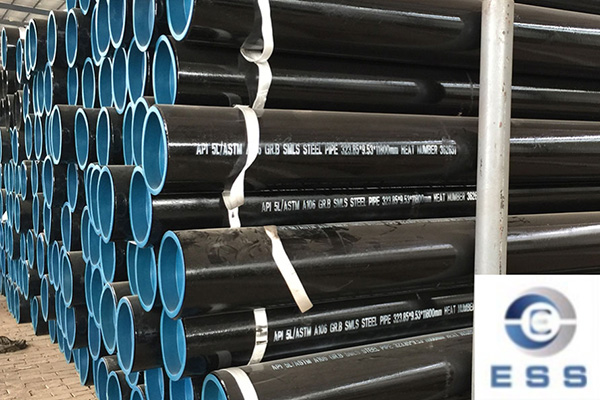 The state in which large-diameter seamless steel pipes are cold-drawn, cold-rolled and other cold-formed steels, directly delivered without any heat treatment, is called cold-drawn or cold-rolled state. Compared with the hot-rolled (forged) state, the cold-drawn (rolled) state of the steel has high dimensional accuracy, good surface quality, low surface roughness, and higher mechanical properties. Because of the cold-drawn (rolled) state of delivery of steel The surface is not covered by oxide scale, and there is a large internal stress, which is easily corroded or rusted. Therefore, the packaging, storage and transportation of cold-drawn (rolled) steel have strict requirements, and generally need to be kept in a warehouse. And should pay attention to the temperature and humidity control in the warehouse.

Large-diameter seamless carbon steel pipes are no longer subjected to special heat treatment after hot rolling or forging, and they are delivered directly after cooling, which is called hot rolling or hot forging state. The termination temperature of hot rolling (forging) is generally 800 to 900 ℃. Afterwards, it is generally cooled naturally in the air, so the hot-rolled (forged) state is equivalent to normalizing.

The difference is that the end temperature of hot rolling (forging) is high or low, unlike normalizing, which has strict heating temperature control. Therefore, the fluctuation of steel structure and properties is greater than that of normalizing. Many iron and steel enterprises adopt controlled rolling. Due to the strict control of the final rolling temperature and forced cooling measures after the final rolling, the grains of the steel are refined and the delivered steel has higher comprehensive mechanical properties. This is the reason why non-twist controlled cold and hot-rolled wire rod has better performance than ordinary hot-rolled wire rod. Steel delivered in hot-rolled (forged) state has a certain degree of corrosion resistance because the surface is covered with a layer of oxide scale. It is stored and transported. The requirements are not as strict as the steel delivered in the cold drawn (rolled) state. Large and medium-sized steel and medium-thick steel can be stored in the open yard or after being covered.

Large-diameter seamless carbon steel pipes are annealed and heat-treated before they leave the factory. This delivery state is called annealed state. The purpose of annealing is mainly to eliminate and improve the structural defects and internal stress left by the previous process, and to prepare the organization and performance for the subsequent process, alloy structural steel, structural steel with guaranteed hardenability, cold heading steel, bearing Steels, tool steels, steam turbine blade steels, and iron cable-shaped stainless heat-resistant steels are usually delivered in annealed state.

In the tensile process, the maximum force (Fb) that the sample bears when it breaks is the stress (σ) obtained from the original cross-sectional area (So) of the sample, which is called the tensile strength (σb), and the unit is N/mm2 (MPa). It represents the maximum ability of a metal material to resist damage under tensile force.

For a metal material with a yield phenomenon, the stress at which the sample can continue to elong without an increase in the force during the stretching process (remains constant) is called the yield point. If the force drops, the upper and lower yield points should be distinguished. The unit of yield point is N/mm2 (MPa).

In the tensile test, the percentage of the length of the gauge length increased after the sample is broken to the original gauge length is called the elongation. Expressed by σ, the unit is %.