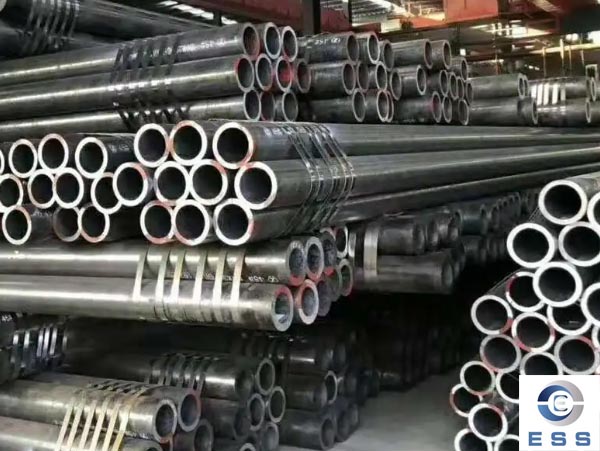 2. Linear uneven wall thickness
Causes:
1) The height adjustment of the mandrel pre-piercing saddle is not suitable. When the mandrel is pre-pierced, it contacts the capillary on a certain side, which causes the temperature of the capillary to drop too fast on the contact surface, resulting in uneven wall thickness and even concave defects.
2) The roll gap of continuous rolling is too small or too large.
3) Deviation of the center line of the tube rolling mill.
4) Uneven reduction of single and double racks will cause linear symmetry deviation of ultra-thin (ultra-thick) steel pipe in the direction of single-rack and ultra-thick (ultra-thin) in the direction of double racks.
5) The safety mortar is broken, and the difference between the inner and outer roll gaps is large, which will cause the straight line asymmetric deviation of the steel pipe.
6) Improper adjustment of continuous rolling, the rolling of piled steel and drawn steel will cause uneven wall thickness in straight lines.

Measures:
1) Adjust the height of the mandrel pre-piercing saddle to ensure that the mandrel and the capillary are centered.
2) When changing the pass and rolling specifications, the roll gap should be measured to keep the actual roll gap consistent with the rolling table.
3) Use the optical centering device to adjust the rolling center line, and the center line of the rolling mill must be corrected during the annual overhaul.
4) Replace the frame with broken safety mortar in time, measure the inner and outer roll gaps of continuous rolls, and replace them in time if there is any problem.
5) During continuous rolling, steel drawing and stacking should be avoided.

Measures:
1) Check the quality of the tube blank to prevent the front end of the tube blank from being cut inclination and the amount of reduction is large, and the centering hole should be corrected for hole pattern replacement or maintenance.
2) A lower piercing speed is used to ensure the stability of rolling and the uniformity of the capillary wall thickness. When the roll speed is adjusted, the matching guide plate is also adjusted accordingly.

Seamless black steel pipe is made up of steel that has not being galvanized. Its name comes from the skin, dark-colored iron oxide coating on its surface. It is used in applications that does not requires galvanized steels.